The first ten years of the Waterloo Tennis Club were uncertain ones but after 1927 it became more secure and progress was steady. It came of age with a growth spurt in the 60s, more specifically the years 1964 to 1968 when significant developments took place – the addition and improvement to the courts, hiring of a full-time teaching professional and the construction of a new clubhouse. These developments took the club to a higher level and the man at the helm during this important period was its president, Ralph Tailby.

Born in 1916, Ralph started playing tennis at the age of 12, joining the club in 1928. The club by then had re-established itself in the park after a decade without a permanent base. In 1934, as an 18-year old, he won the club singles championship, the first of six consecutive championship wins. The run ended in 1939 with the outbreak of World War II and the suspension of tennis activities.  After the war, Ralph continued where he left off and had great success at national and international level tournaments throughout his playing career.

Ralph’s success on the courts enhanced the club’s standing in the community but it was his achievements off the court that were to be his lasting legacy to WTC.   In the post-war years the demand for courts grew significantly and to meet this demand, the municipal boards began constructing courts in and around the cities in the early 60s.  The Waterloo Tennis Club though, decided to take charge of its own affairs and in 1964, the Board led by Ralph Tailby made the decision to add two more courts to the existing four red clay courts. All six were overlaid with a new material called Har-Tru which we still have today.  In addition to the courts, new fencing, new lights, a retaining wall between courts 2 and 3, bleachers, swings and a sand box for members’ children were also part of the makeover.  The club received no municipal grants and the expenses totalling $34,000 were the responsibility of the members. Three contractors who did the work for the club generously allowed it to defer payments.

The intrepid volunteers who worked with Ralph to push the work through were Ian Dagg, Barney Lawrence, Irma Kirsch, Art Kretz, Ron Wagner, Helen Nethercott, and Werner Schlueter, the membership secretary, who delivered flyers to homes in the K-W community to drum up membership. Through their valiant efforts and keeping a tight control of expenses, the debt was paid off within five years.

The hiring of the club’s first full-time teaching professional, Ed Brandreth in 1966 was another important step forward for the club. Ralph recognized that coaching was necessary for the progress and development of juniors.  The juniors at the time were coached by the more accomplished adults in the club.  Ralph felt that this was not an ideal way to learn the game properly because the adults were at work during the day.  In an article that appeared in the K-W Record May 27, 1966, Ralph explained to writer John Herbert that “ Juniors are the lifeline of the club.  We have to keep them interested in the game and develop them, because the future of the club is in their hands.” Though Brandreth’s stay at the club did not last long, the club was to have a full-time coach in its employ from then on. 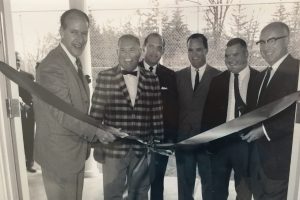 The third significant achievement during the Tailby years was the construction of the present clubhouse in 1968.  The clubhouse at the time consisted of a small lounge area and a shower and change room each for men and women. The flooring in the shower stalls were planks of wood.  Members referred to the clubhouse as ‘the shack’. The need to have a larger clubhouse with proper washrooms and locker rooms was obvious and this time the club received help from the City of Waterloo which provided a loan of $80,000 at 7 ½% interest rate to be repaid over 20 years.

Lew Bradich who joined the club in the early 50s served two years on the board when Ralph was president. In an interview March 2, 2015, Lew recalled a president who was capable, well-organized and always with a smile.  “Ralph was an accountant and he used his training to keep a tight control of expenses. He was a popular leader of the Board and well respected. The Board looked up to Ralph because of his tennis prowess and his very organized mind. He was instrumental in getting the new club house built. He took the club to a much more professional level and made it a very good tennis centre.”  Lew went on to say that Ralph was also a bon vivant who enjoyed entertaining and was a gracious host.  He remembered Ralph hosting an enjoyable party at his home for former Wimbledon and US Open champions Jack Kramer and Tony Trabert in 1959. The two had taken a day off from a tournament in Toronto that Kramer had organized to conduct a coaching clinic at the Waterloo club courts.

Ralph was a man of many talents. As the club was a summer-only club at the time, he played squash during the winter and was quite adept at it. His regular practise partner and opponent was his very good friend Barney Lawrence, a lawyer and international squash player who, together with Ralph, founded the Kitchener-Waterloo Squash club.

Ralph Tailby died Dec 28, 1978 on a vacation in the Bahamas. He was 62. He was a retired partner but still an active consultant with the chartered accounting firm of Coopers and Lybrand in Kitchener.  Ralph had worked with his father, also a chartered accountant, before becoming a partner at Coopers and Lybrand.  He was a member of the Rotary club and served on the board of the Ontario Tennis Association.   Ralph had three children with his wife Lucy (Kuntz), the youngest being Pat Babcock, a past president of WTC (1993-95) and one of the club’s top women players.

In 1985 Ralph was inducted into the Waterloo County Hall of Fame.  He was made an Honourary Life member of the Waterloo Tennis Club in recognition of his outstanding contribution to the development of the club.

Written by Pat Craton. Grateful thanks to Mary Liz Hearn for her collection of research material.